​Clue On Stage, adapted from the Paramount Pictures film written by Jonathan Lynn and the board game from Hasbro, Inc. written by Sandy Rustin, based upon the works by Jonathan Lynn, Hunter Foster, and Eric Price It's a dark and stormy night, and you've been invited to a very unusual dinner party. Each of the guests has an alias, the butler offers a variety of weapons, and the host is, well . . . dead. So whodunnit? Join the iconic oddballs known as Scarlet, Plum, White, Green, Peacock, and Mustard as they race to find the murderer in Boddy Manor before the body count stacks up. Based on the cult classic film and the popular board game, Clue is a madcap comedy that will keep you guessing until the final twist.

Characters
WADSWORTH, a traditional British butler in every sense: uptight, formal and “by the book.” He is the driving force in the play.
YVETTE, a loyal and sexy French maid.
MISS SCARLET, a dry, sardonic D.C. madam, more interested in secrets than sex.
MRS. PEACOCK, the wealthy wife of a senator. A bit batty, neurotic, and quick to hysteria.
MRS. WHITE, a pale, morbid, and tragic woman. Mrs. White may or may not be the murderer of her five ex-husbands.
COLONEL MUSTARD, a puffy, pompous, dense, blowhard of a military man.
PROFESSOR PLUM, an arrogant academic, easily impressed by himself.
MR. GREEN, a timid yet officious rule follower. He’s awfully anxious.
ENSEMBLE WOMAN: THE COOK, a gruff woman with a threatening presence. (Alive and Dead.)
SINGING TELEGRAM GIRL, a tap dancer with a heart of gold. (Alive and Dead.)
AUXILIARY SCARLET, the back of Miss Scarlet during a scene of theatrical trickery.
BACKUP COP, backup for the Chief in the very final Cop entrance.
ENSEMBLE MAN 1: MR. BODDY, a slick, Frank Sinatra, film noir-esque type fella. (Alive and Dead.)
THE MOTORIST, a professional driver. (Alive and Dead.)
CHIEF OF POLICE, a cop who helps to save the day.
ENSEMBLE MAN 2: THE UNEXPECTED COP, a regular Joe. (Alive and Dead.)
BACKUP COP, backup for the Chief.
​AUXILIARY MUSTARD, the back of Colonel Mustard during a scene of theatrical trickery.
WAYS TO GIVE
PURCHASE TICKETS

Welcome to Dexter Community Players!
Proudly entertaining our community since 1981.

We are so happy you are here! Dexter Community Players is Dexter, Michigan's community theater organization.
​We are a passionate group of community actors from youth to adult,
taking the stage to challenge ourselves and provide a wonderful, fun-filled entertainment experience for our audience.
​​
We're storytellers and can't wait for you to experience our stories. 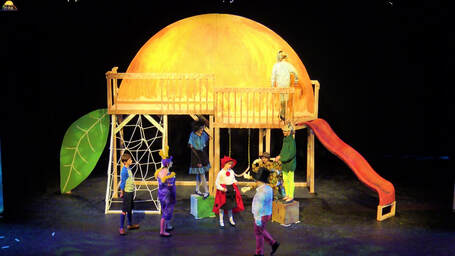 James and the Giant Peach | Children's Theater | January 2020
Dexter Community Players is a 501(c)3 non-profit organization established to provide an authentic and enjoyable experience for theater enthusiasts of all kinds in the Dexter Community. Since our founding in 1981, we have brought more than 50 productions to the stage. Fondly referred to by our initials "DCP", we are a strictly volunteer organization. Our membership hosts a wide variety of ages, skill sets, levels of experience and areas of interest. While our talented cast is highlighted on stage, our entire membership includes those interested in building, painting, sewing, advertising and much more!

LOOKING TO GET INVOLVED WITH DCP?
​ HERE'S HOW!

Community Theatre...
​At Its Best